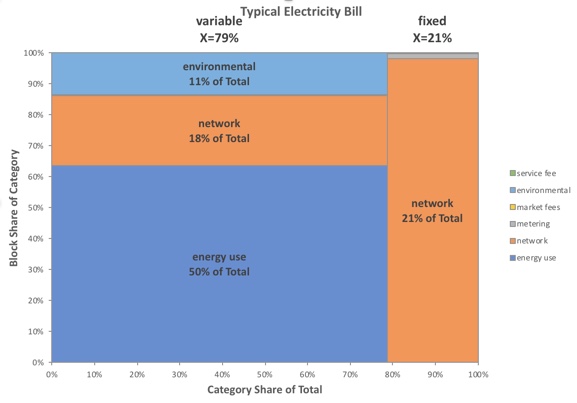 This week I listened to a Tim Ferriss podcast interview with Nick Kokonas who is the co-owner and co-founder of The Alinea Group of restaurants in the U.S.

I thought I would have to start using Marimekko charts for my own cost analysis and for visually explaining electricity bills and the relative importance of each of the components.

I’ve assumed, for this example, that network demand charges are fixed. However, with focus and analysis, even they can be reduced.

From the chart we can see that 79% of the total bill is a variable charge dependent on the amount of electricity the business consumes. This is despite only 50% of the bill being the energy component (the bit that retailers compete on price with).

Electricity consumption determines the environmental charges (state, large scale and small scale renewable energy certificates), a portion of the network charges and also market charges (not shown on the chart as this proportion is too small).

In this simple example of using a Marimekko chart for electricity bill analysis we can see that the biggest lever that we have to reduce costs is to reduce consumption. This means focusing on energy efficiency and investigating the business case for renewables such as solar or heat recovery. Most importantly, it shows that when you are developing the business case for efficiency or renewable projects that the full variable cost should be used to justify the capital and not just the energy cost per unit.

I’m keen to know if you found the Marimekko chart useful for visually explaining costs?