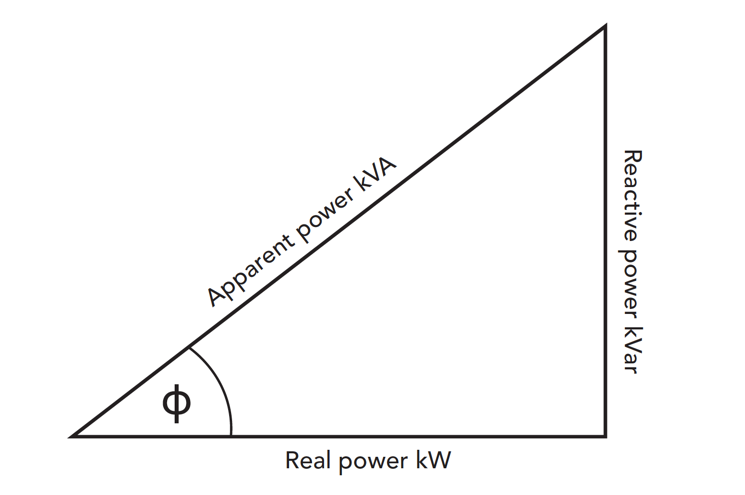 In this article we look at how electricity costs can be reduced by improving power quality and revise some high school trigonometry.

Many businesses that I talk with think they only get one shot to reduce their electricity costs and that is when they “negotiate” their new contract. That is far from the case. In fact, the outcome of a skilled negotiation for a new supply arrangement only yields a small cost savings compared with other opportunities.

As readers of previous articles have seen, there are many other ways to reduce electricity costs even during the term of an existing supply agreement. These include electricity efficiency measures, load shifting, choosing the right tariff and investing in renewable generation.

The part of the electricity supply agreement that you “negotiate” with retailers is the energy component or the electrons that flow down the wires. This part is often only 50% of the total bill for medium size electricity users and a bit higher for larger users. The remainder of the bill is largely network supply charges, the cost of the poles and wires and other infrastructure required to deliver the electrons to your business.

So, whilst the skilled negotiator may be able to skim 5% off the price of 50% of the bill, or 2.5%, there are often greater opportunities to reduce your total cost of supply.

The network supply tariff varies between different networks, but it comprises of a time of use energy charge in c/kWh and a demand charge in $/kVA.

The demand charge is usually the larger component in the network supply costs and is meant to be cost reflective of supplying your business and is measured in “Apparent Power” (kVA).

What is “Apparent Power” and how does it impact you supply costs?

When a motor draws power to rotate and drive equipment it uses “Real Power” (kW) to do the work. However, due to the current waveforms and the voltage wave forms not being in phase with each other we get what is called “Reactive Power” (kVAr) that does not do any work. When we add up the power-using equipment for the whole site we end up with an aggregate site load in Real Power and Reactive Power.

What the network “sees” as the power supplying your business is called the “Apparent Power” (kVA) which is a result of combining the Real Power with the Reactive Power.

It is this Apparent Power that uses up network capacity. Therefore, cost reflective demand tariffs use Apparent Power in kVA. These tariffs are approved by the regulator and passed through to you at cost by the retailer.

The ratio of Real Power to Apparent Power is called the power factor.

Some sites have a very poor power factor of around 0.70 or less. This means that these sites are paying 40% more for their network demand charges than is required.

This represents an annual cost savings of $54,750 per year which is likely a higher saving than a skilful negotiator and a competitive tender could have achieved through the contract negotiation process.

Of course, it costs money to design, buy and install power factor correction equipment (capacitor banks), but experience has

demonstrated that the payback period for this modest investment is usually one to two years.

The importance of monitoring power factor

Some sites install power factor correction, which is simply a bank of capacitors, and then just forget them other than, perhaps, some annual maintenance inspections.

Capacitor banks can and do fail, particularly the older ones, and the site power factor and maximum demand must be monitored and controlled at all times. It only takes one half-hour period for your site demand charges to be reset to the higher level. If possible, the process control system should be programmed to shed load if any of the capacitors fail and demand increases.

In another example, at a site that I once managed, we’d had a long-term maximum real load of 5,500 kW but poor power factor of less than 0.80, which gave us a maximum demand of around 7,000 kVA. We installed power factor correction equipment in around 2008 and were then able to demonstrate to the network provider that we had reduced the maximum demand in kVA. The network provider agreed to lower the agreed demand to 5,600 kVA based on our demonstrated performance. This represented an annual saving of around $168,000.

Ten years later as an energy consultant, this company engaged me to come back and review their site load profile. What we discovered was that there had been a large increase in demand charges back to the previous level.

Our analysis found that there were a small number of large demand spikes over a 48-month period. When we drilled down into the data we identified that the cause were short term sudden decreases in power factor.

During a workshop to review the results of the analysis the site electrical engineer confirmed that they did have problems with the capacitors from time to time and they did automatically shut down occasionally.

What the engineer did not realise though was the impact on site demand charges. As soon as the network supplier measured the increase in demand, the monthly agreed demand level was reset immediately to the higher level and charges increased accordingly. No-one noticed.

The site demand charges were increased by $200,000 annually and the operations manager approved the monthly invoice without recognising an increase in the bill and without recognising that anything unusual had occurred. The accounts payable clerk paid the bill without understanding it properly, and the electrical engineer and electricians had no idea of the cost impact of the failure as he didn’t see the bills.

These increases can sneak in over time without anyone being aware.

If you would like to learn more, then check out my book Power Profits.