The last week of Autumn 2018, over the period from Sunday 27th May to Saturday 2nd June, has been very interesting for explaining South Australian electricity price action as it was a great example of how generation mix and price change with changes in wind generation. The week was characterised by modest demand throughout the week and a drop off in wind generation in the second half of the week. Overall, electricity prices were relatively low, for South Australia.

The chart below shows a time series plot of half-hour electricity prices over the week. 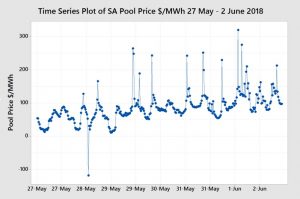 The plot shows an increasing trend as the week progresses with some $200 price spikes from the Tuesday 29th May. 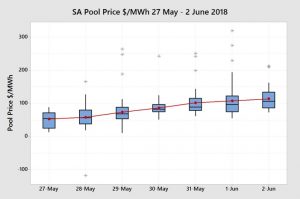 The box-plot for the distribution of all half-hourly prices are shown below for the whole week and by peak and off-peak periods. 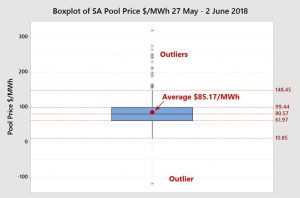 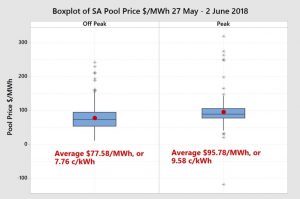 If we also take a look at the box plot for daily demand we can see that it is not necessarily demand pushing the price up. Sunday 27th May and Monday 28th May were lower compared with the rest of the week and there was the expected drop in demand on the Saturday that did not result in lower prices. 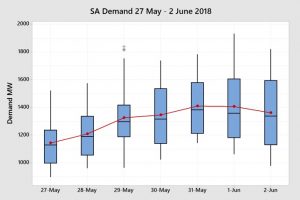 So what pushed prices up as the week progressed?

Looking at the time series plot of half-hour periods for wind we can see that wind was strong, around the recent historical median, and relatively steady for the first half of the week and then dropped away quite sharply to very low levels in the second half of the week. 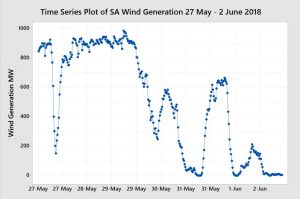 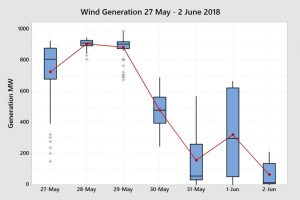 Let’s now look at how each of the major power stations and other generation reacted to the drop off in the wind generation. 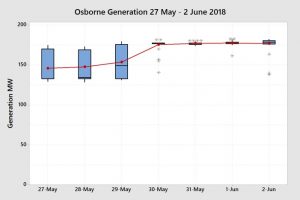 The ever-reliable and consistent Osborne Power Station maintained a reasonably consistent output of the week with a step up on the 30th May when the wind dropped off. In the first three days it would appear that it was out bid by Pelican Point and the Torrens Island Power Station (TIPS) for the last 30 MW of capacity. 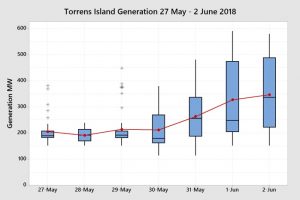 TIPS was also steady for the first three days and ramped up with the drop off in the wind generation. 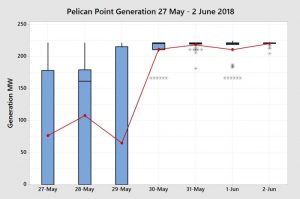 Pelican Point Power Station, with only one unit running, showed a large amount of variation in the first three days indicating that it was ramping up and down to meet demand. It was likely providing the incremental generation required to meet demand in the first three days and setting the price. In the last four days it ramped up to full capacity, for one unit, to respond to the increase in demand with the drop off in the wind. It would not have been the price setter for these last four days. 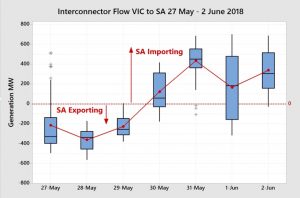 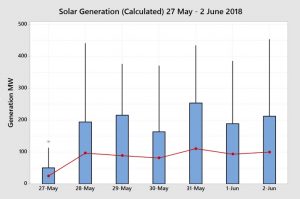 Solar generation was largely consistent for each day of the week except for a more than 50% lower generation rate on Sunday 27th May. 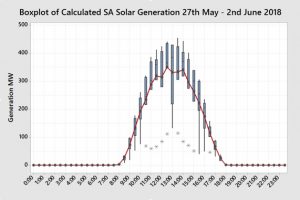 For those that are interested, the box plot of solar generation by half-hour for the week is shown above. In this last week of Autumn, generation started to appear after 8:00am and ceased after 5:30pm, when almost everyone was at work or school. 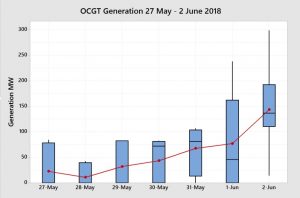 As expected, Open Cycle Gas Turbine (OCGT) generation was low for the first three days of the month and ramped up from 30th May. It was particularly high on Saturday 2nd June. As OCGT generation costs are higher than Combined Cycle and thermal gas power generation their bid prices would be expected to be much higher. The high amount of variability within the day shows that OCGTs were ramping up and down to meet demand and likely setting the price for much of the last four days of the week. 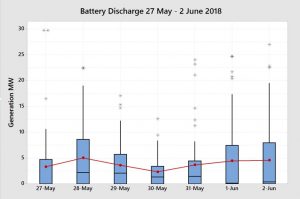 The battery output remains a small but important component of the overall generation mix. Whilst the battery provides an important Frequency Control Ancillary Service (FCAS), it’s output helps to meet demand and reduce the need for OCGT and diesel generation thus suppressing prices. 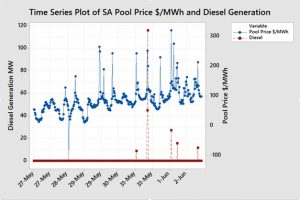 The chart below shows the contribution of each of the major generation sources throughout each half-hour period of the week 27th May to 2nd June 2018. 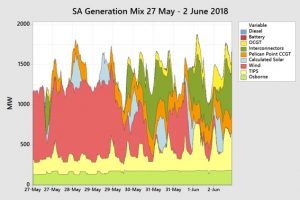 Let’s now have a look at demand a different way and examine demand distribution by time-of-day during the working week. 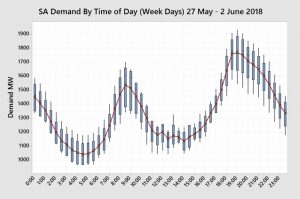 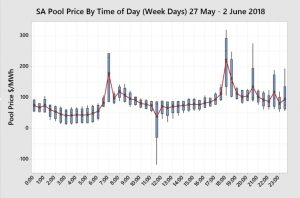 The box-plot of price by time-of-day reflects this demand pattern and we can see predictable price increases during the 6:30am – 7:00am and 5:30pm – 6:30pm periods.

This predictability helps in several ways. It provides information for end users that they can use to plan operations and it also provides an opportunity for the battery to take advantage of a price arbitrage. The battery can charge overnight and early afternoon when prices are low and then discharge during these high demand and higher price periods in addition to other sudden price spikes. Let’s have a look at the time-of-day discharge pattern of the battery. 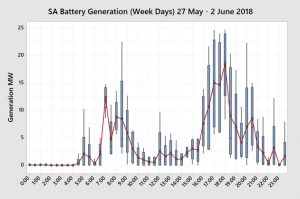 So how can all this information assist end users?

More importantly, those end users who do not understand the market well can utilise this information to start building their knowledge. They can predict increases or decreases in fixed retail prices and evaluate whether retail prices are fair or not.

My new book Power Profits shows end users how the market operates and they can take advantage of that knowledge. It provides a comprehensive 9-step framework for reducing electricity costs and boosting business profits.

If you would this weekly report emailed to you then drop me a line at michael@altusenergy.com.au

Acknowledgment and thanks to Paul McArdle of Global-Roam for providing the raw data through the NEMReview software.