The last week of June 2018 saw very low wind for much of the week and so prices rose on the back of increased reliance on more expensive gas generation, particularly Open Cycle Gas Turbine generation and on imports from Victoria. The average wholesale market price for the week was $115.89/MWh and the median was $111.58/MWh.

Figure 1 shows the box plot of the daily distribution of half-hour prices for the week. It can be seen that the average price (in red) was above $100/MWh for the first five days of the week, beginning Sunday, and then dropped sharply for the last two days of the week. 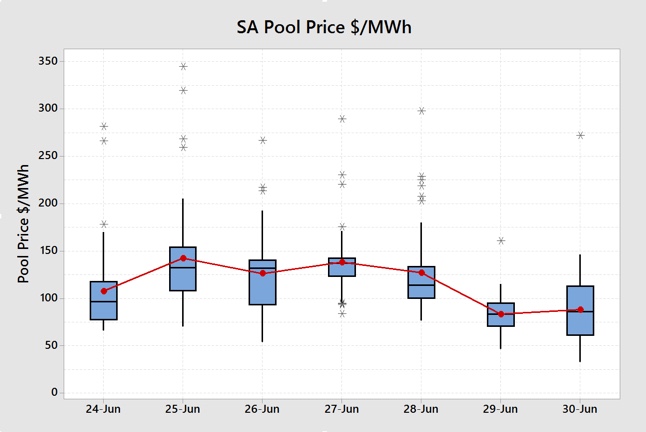 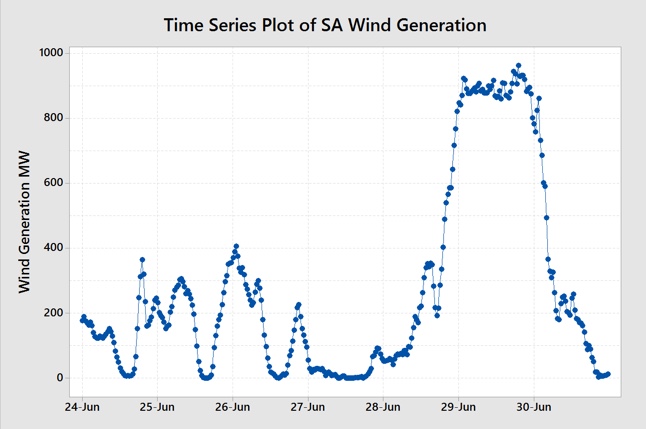 Figure 3 shows this same wind generation data in a box plot format by day. Note the very consistent wind generation output on the 29th June compared with almost no wind on the 27th June. 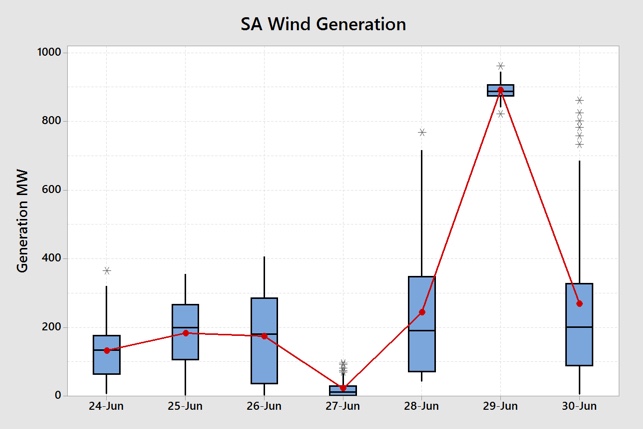 It is interesting to examine which forms of generation filled the gap when the wind wasn’t blowing. The charts below show the box plots for the daily distribution of half-hour generation from the major power stations. 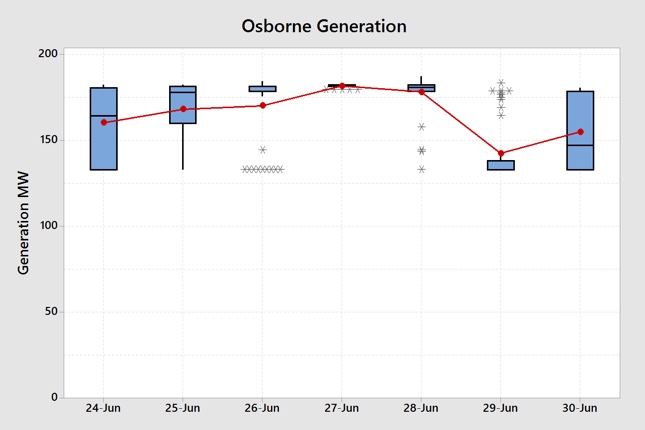 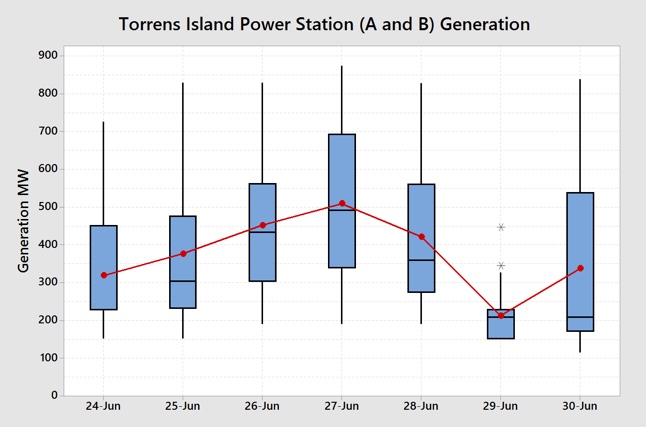 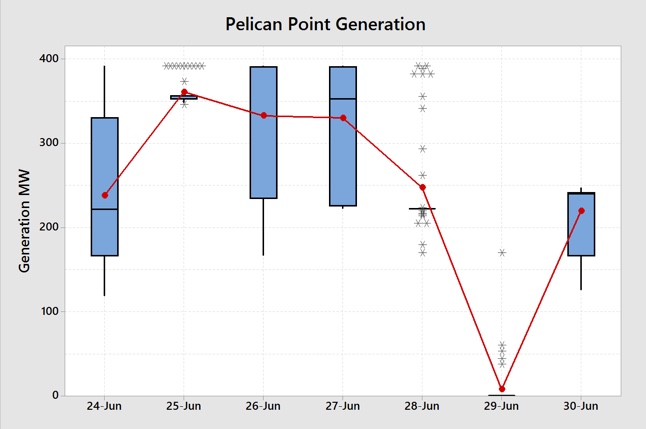 It can be seen that the Osborne Power Station, as usual, ran reasonably consistently for the week at capacity or near capacity. However, the Torrens Island and Pelican Point Power Stations had a large range of generation output, indicated by the size of the boxes. Pelican Point ran one unit at near capacity on the 25th June but was well below capacity for the other days. Torrens Island ramped up and down by up to 400% on each of the low wind generation days. 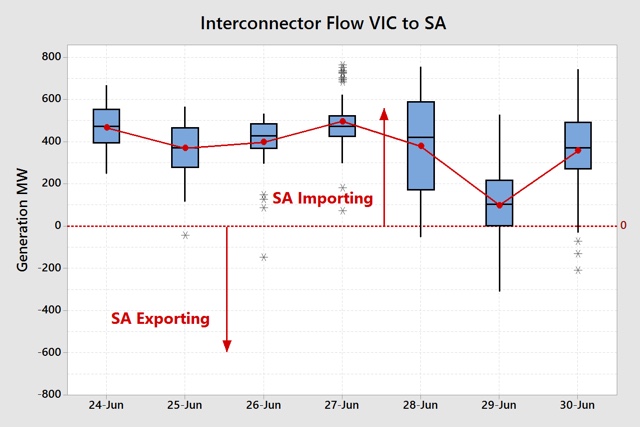 Figure 7 shows that even on the strong wind generation day on the 29th June that only 25% of flow over the interconnectors went from South Australia to Victoria.

In the generation mix chart shown in Figure 8, we can see the dark green interconnector import flows displacing the yellow Pelican Point generation and maroon Torrens Island (TIPS) generation in periods of both high and low wind generation. 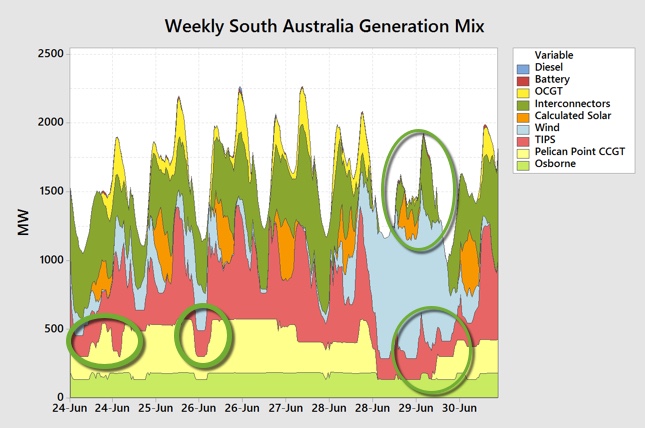 Taking a look at other contributors to electricity supply, we can see in Figure 9 that Open Cycle Gas Turbine generation remained quite high during the week except for the high wind generation day of the 29th June.

This higher cost form of generation was attracted in to the generation mix by the high prices for most of the week. The lower cost, more efficient and larger power stations largely “vacated the field”. There were also a few half-hour incidents of diesel generation coinciding with some of the higher price spikes as shown in Figure 10. 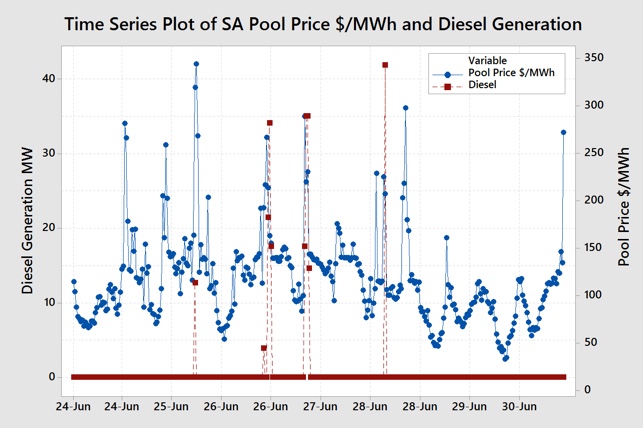 Usually, diesel generation would normally set the prices at much higher levels. It is possible that the Big Battery, shown in Figure 11 below, displaced much of this higher priced generation. 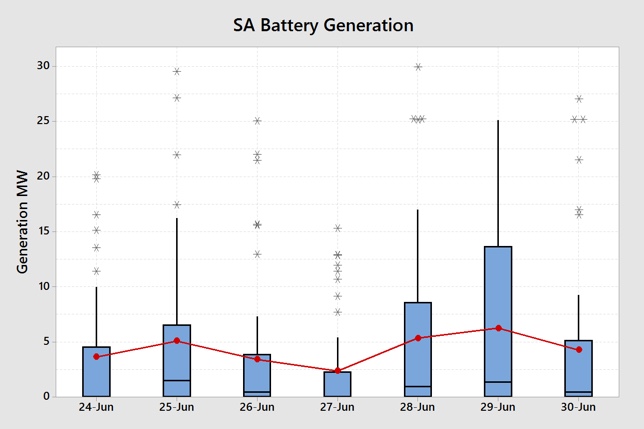 In some half-hour periods as much as 30 MW is being discharged from the batteries, as seen in some of the outliers.

Finally, behind the meter rooftop solar generation continues to play its part in reducing demand as shown in Figure 12. There was a drop off in the calculated solar generation on the 29th June on the day of the higher wind generation reflecting cloudy conditions. 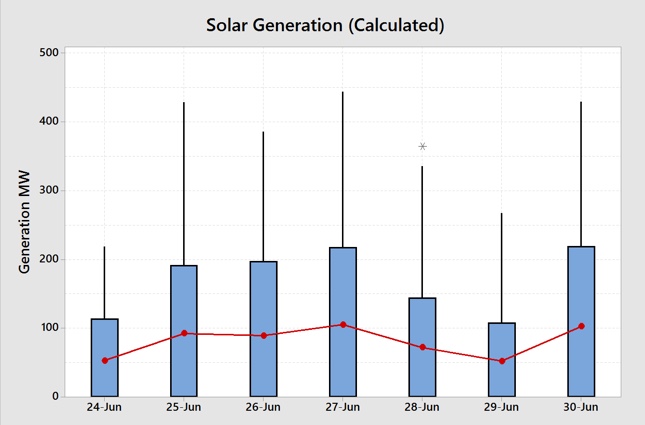 Figure 13 shows the distribution of half-hour demand by time-of-day through the week. We can see the early morning increase in demand as people wake up, turn on heating, large screen TVs and breakfast appliances and then again in the late afternoon higher peak when they arrive back home and turn on their heating and all of their appliances. 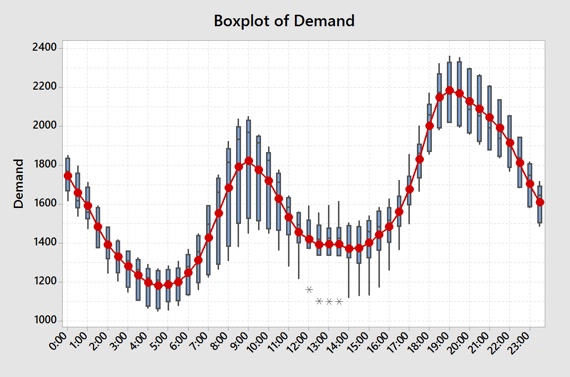 Figure 14 shows how these fluctuations in demand play out in half-hour prices. These demand and price patterns are quite predictable and can be used by end users. 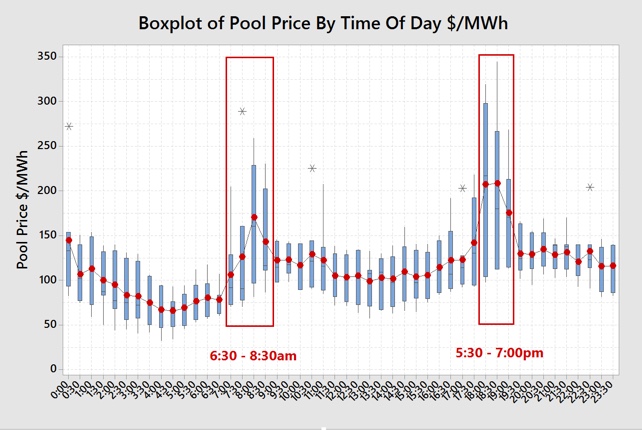 For those businesses with partial or full exposure to half-hour wholesale pool (spot) prices, shifting load or curtailing during the early morning or late afternoon peaks will assist those end-users to reduce their overall average price.

If you would like to understand more about how business end-users can reduce their electricity prices then check out my book Power Profits – A Comprehensive 9-Step Framework For Reducing Electricity Costs and Boosting Profits. You will find a link to the book here.