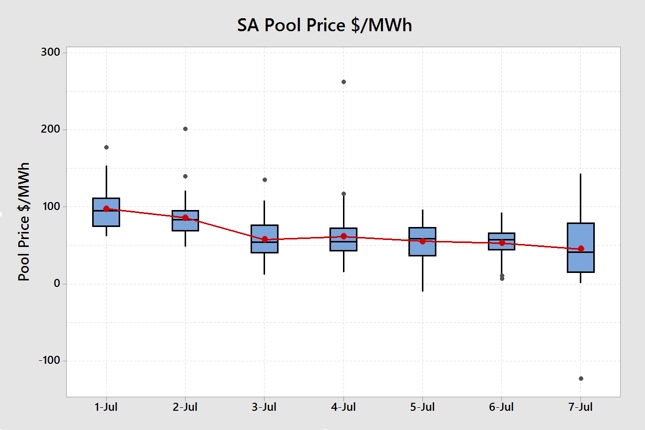 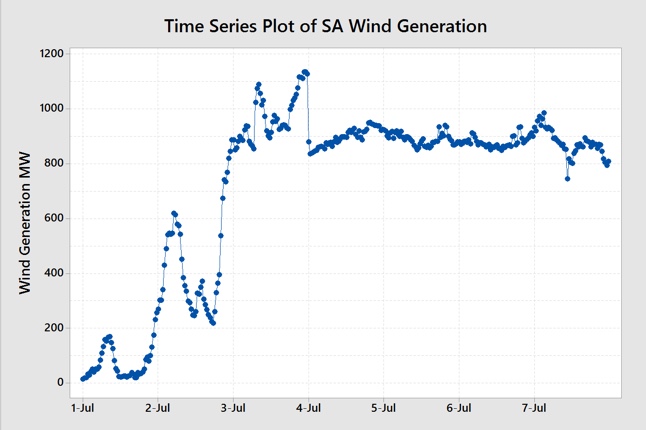 There was a sharp drop off in the wind generation by 249 MW on the 4th of July, just after midnight, that brought diesel and the battery on for half an hour and pushed the spot price to $261.94/MWh. Pelican Point was shutting down at this time and had dropped 120MW during this same half-hour period. I have not been able to determine whether AEMO curtailed wind generation when Pelican Point came off. This same half-hour time period also coincides when demand picks up at midnight by about 100 MW when hot water services turn on.

Figure 3 shows this same wind generation data in a box plot format by day. Note the one outlier on the 4th July at 1128 MW. This was the half hour wind generation output between 11:30pm on the 3rd July and midnight on the 4th July. The large difference between that one half-hour period and the box for the 4th July indicates that there may have been a market direction by AEMO to curtail wind to maintain system stability. 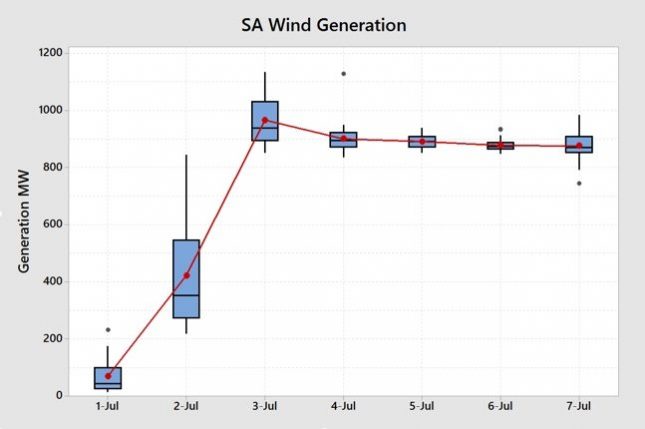 It is interesting to examine what actions the larger power stations took when the wind generation picked up. The charts below show the box plots for the daily distribution of half-hour generation from the major power stations. 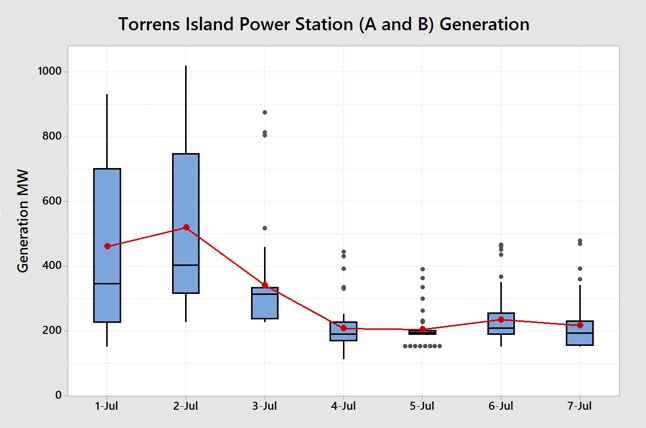 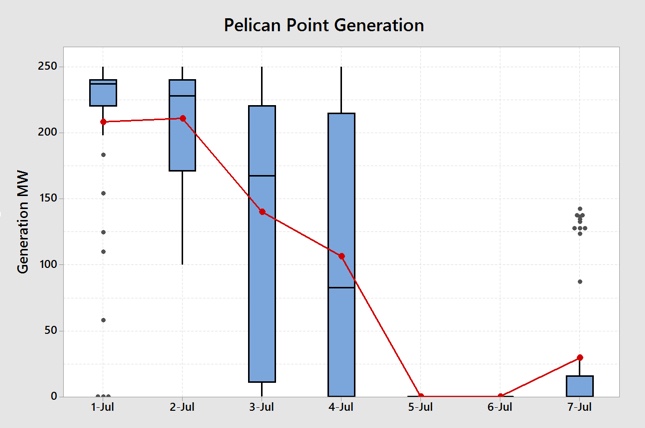 It can be seen that the Osborne Power Station shutdown from the 3rd through to the 6th July, Torrens Island significantly reduced generation output during that same period and Pelican Point initially reduced output on the 3rd and 4th July and then shutdown on the 5th and 6th July, restarting on the 7th. 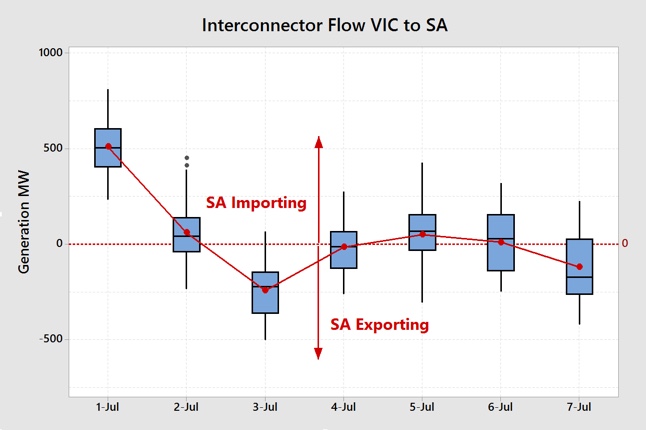 Figure 7 shows that South Australia was importing electricity from Victoria on Sunday 1st July when the wind was very low and was exporting by Tuesday 3rd of July when the wind picked up. However, even on the strong wind generation days from the 4th to the 6th July, there was a balanced flow over the interconnectors from South Australia to Victoria. This means that Victorian prices were not attractive enough for the larger power stations to continue to run and export electricity. South Australia was exporting to Victoria for almost 75% of the day on Saturday 7th when local SA demand dropped away and Osborne and Pelican Point restarted.

In the generation mix chart shown in Figure 8, we can see the light blue wind generation displacing all of the light green Osborne, much of the maroon Pelican Point and a significant amount of Torrens Island (TIPS) generation. 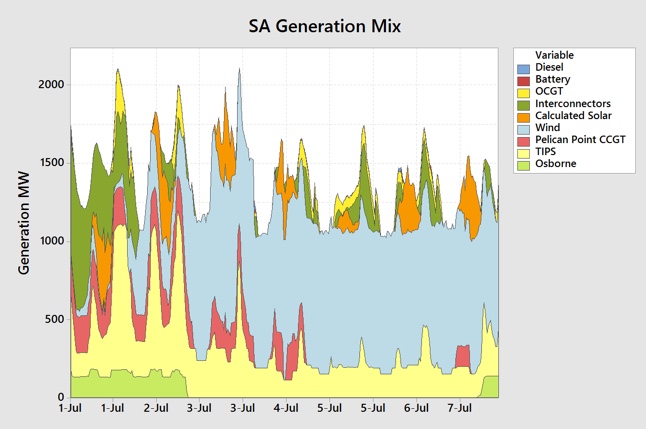 Taking a look at other contributors to electricity supply, we can see in Figure 9 that Open Cycle Gas Turbine generation was quite low for much of the week and rarely exceeded 100 MW. 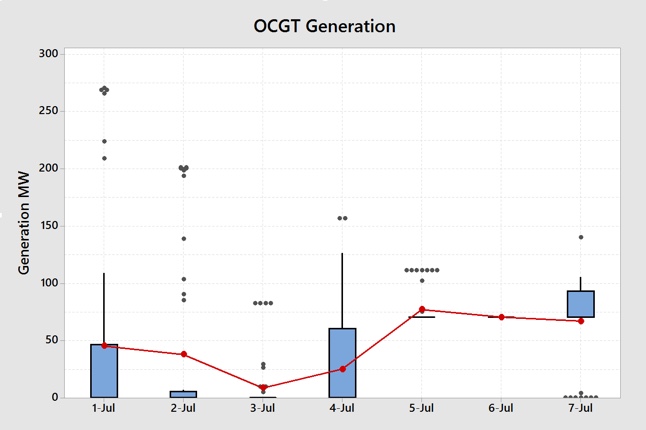 There were four half-hour incidents of diesel generation shown in Figure 10 including the first half-hour period of the 4th July when there was a large and significant change in the generation mix. Diesel generation and battery output maintained frequency control and supply during that fast change. 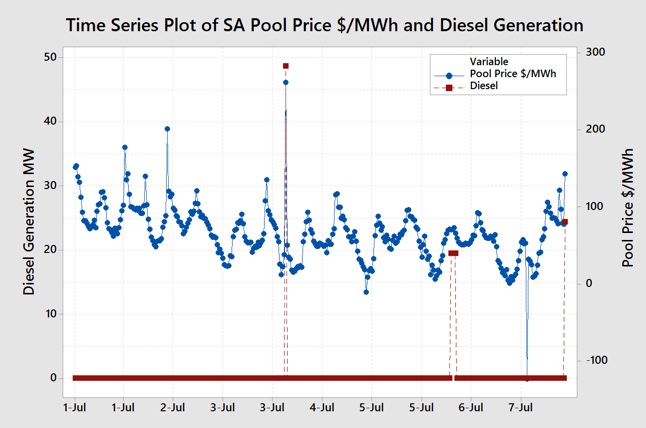 Usually, diesel generation would be used at periods of very high demand or when there is a rapid change in demand and/or supply. During the week diesel was used during large changes in supply. However, the role of diesel and OCGT is being taken over by battery supply. 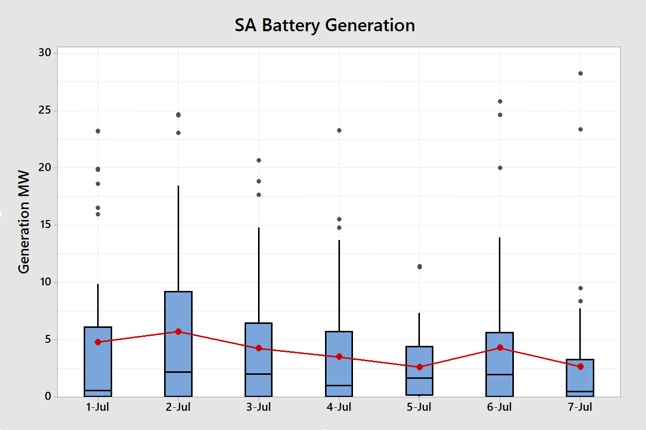 Figure 11 shows the “Big Battery” supply box plot for the week. In some half-hour periods between 20 and 30 MW is being discharged from the batteries, as seen in some of the outliers.

Figure 12 shows the battery discharge pattern by time-of-day. It is obvious from the chart that the battery is supplying “peaking” generation supply during the early morning, late afternoon and the hot water service midnight periods. 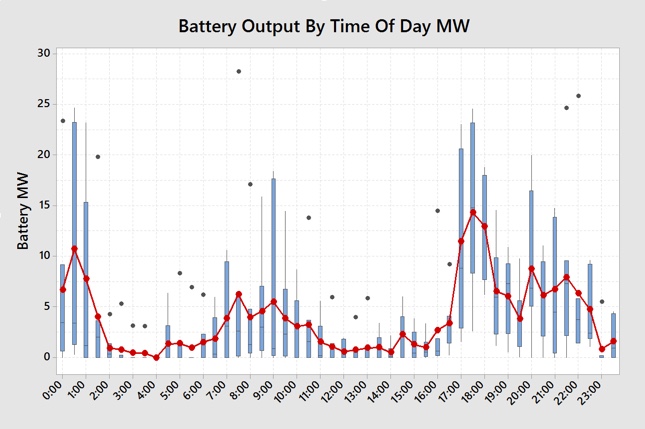 Finally, behind the meter rooftop solar generation continues to play its part in reducing demand as shown in Figure 13. There was a drop off in the calculated solar generation on the 4th and 5th of July due to cloudy conditions. 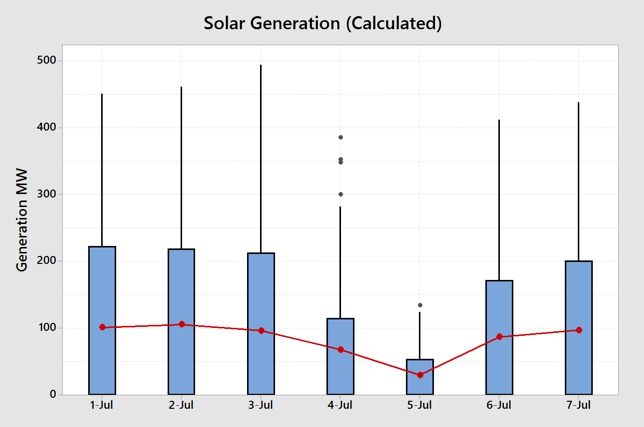 Figure 14 shows the distribution of half-hour demand by time-of-day through the week. We can see the early morning increase in demand as people wake up, turn on heating, large screen TVs and breakfast appliances and then again in the late afternoon higher peak when they arrive back home and turn on their heating and all of their appliances. There is also a jump of about 100 MW after midnight when hot water services turn on. 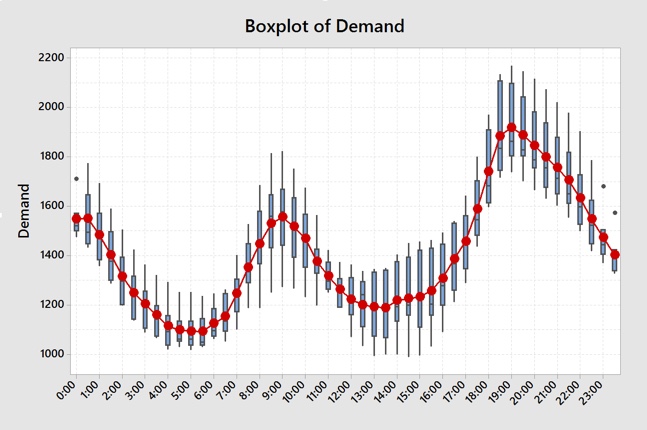 Those end users who choose to purchase their electricity through wholesale market pass-through prices can gain a better understanding of how they can manage their risk through load shifting and load curtailment or Demand Side Management.

If you would like to understand more about how business end-users can reduce their electricity prices then check out my book Power Profits – A Comprehensive 9-Step Framework For Reducing Electricity Costs and Boosting Profits.